Ho Chi Minh City is the largest city of the country and has asserted itself very early as the economic capital of Vietnam. You are preparing for your stay and do not know what to do? We’ve put together a list of the “Top 15 Things to Do in Ho Chi Minh City” for you. Each activity is designed to immerse you deeply into the excitement and irresistible charm of the city of a thousand facets.

A true French space in the heart of the city, this district is home to a vast architectural heritage dating back to the French colonial period. Start your stay by visiting the Central Post Office, built with the support of Gustave Eiffel, and the Cathedral of Notre Dame, made of red brick dating from 1880.

Then stroll down the former Catinat street passing by the City Hall, the Opera House and the historic “Continental” hotel. A stroll along the long shady avenues lined with colonial houses, historical monuments and gardens will allow you to discover the city that was once called the pearl of the Far East.

A real city within a city, this district is the major commercial center of the southern capital. It is full of traditional shops decorated with Chinese ideograms, colorful Buddhist temples, as well as other religious buildings and markets. Quan Am Pagoda and Thien Hau Temple are two must-see sites. And don’t miss a stroll through the medicinal herbs street or Binh Tay market. In these places, you will breathe the particular atmosphere of the district and plunge into the heart of the Chinese culture and traditions.

If you only have a little time to visit the markets in Saigon, the Ben Thanh market and the Binh Tay market are two options not to be missed.

Located in the city center, Ben Thanh Market has long become an icon of Saigon. It is not only a place of sale, but also a witness of the city’s history. Rebuilt during the French colonial era, the century-old building has undergone major renovations to the exterior and interior but the overall architecture is retained with its iconic clock tower at the forefront. Ben Thanh Market is considered the largest retail market as you will find a multitude of souvenir items but also all kinds of various products (food, handicrafts, textiles, hygienic…). In addition, in this market, you will discover many dishes from the Vietnamese cuisine.

Built in the 1920s and located in Chinatown, Binh Tay market is a major commercial center not only for the locals but also for the farmers who sell daily products from all directions of South Vietnam. You can find in this wholesale market mountains of items (dried products, spices, clothes, household items, jewelry, etc.) at an affordable price. Don’t miss also the experience of eating, on the first floor, at one of the many stalls offering Vietnamese dishes like Phơ, Bun Bo (rice vermicelli with stir-fried beef), Bun Rieu (rice vermicelli with crab), Banh Mi (Vietnamese baguette), etc.

The Reunification Palace (also known as the Independence Palace) is an emblem of Vietnamese history. Originally called Norodom Palace, it served as the residence of several leaders, including South Vietnamese President Ngo Dinh Diem, until the end of the Vietnam War. Typical of the architecture of the 1960s, the palace is a harmony of modern and traditional oriental architecture. On April 30/1975, a North Vietnamese tank smashed the gate of the palace, marking the end of the Vietnam War.

The War Museum was first opened to the public in 1975. Having become one of the most visited museums by Western tourists in Ho Chi Minh City, the War Museum is a vivid picture of Vietnam during the years of war against the United States. It is home to over 20,000 photos, films, artifacts and documents that remind us of the horror of war and the value of peace.

Visit the Opera House and see the A O Show

Built in 1897 in the neoclassical style and inspired by the design of the Garnier Opera House and the Petit Palais in Paris, the Saigon Opera House is an architectural work of art that adds much charm and elegance to downtown Saigon. Today, it serves as a venue for traditional Vietnamese music, Western classical music, and high-end performances. 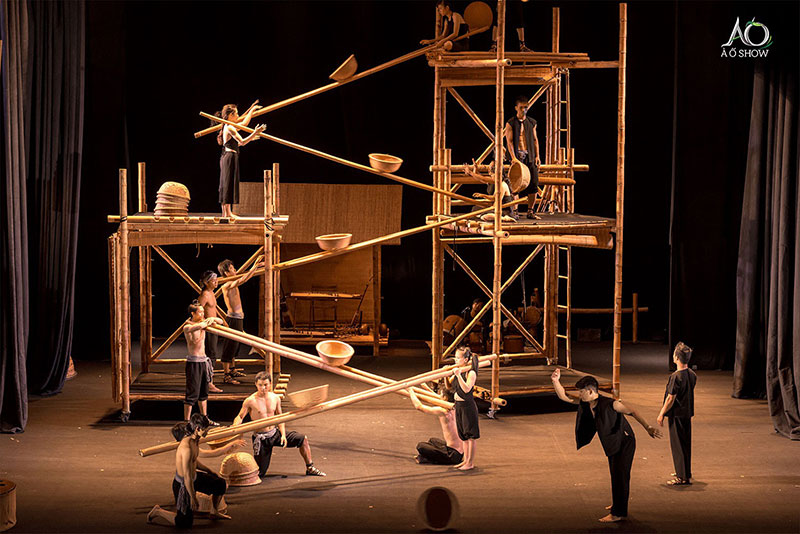 Step inside the Opera House and enjoy A O Show, a poetic show that blends contemporary circus acrobatics with theatricality. The troupe of musicians performs Vietnamese folk songs with more than 15 traditional instruments. The main materials are the bamboo, emblem of chastity and the basket boat, reflecting the spirit of the Vietnamese people.

Built in 1876 in Romanian and Gothic style, Tan Dinh Church is considered the second largest church in Saigon, after Notre Dame Cathedral. With its bright pink facades and remarkable architecture, this church will win your heart at first sight.

Nestled in a small hidden enclave of downtown Saigon, the Jade Emperor Pagoda offers a quiet sanctuary away from the hustle and bustle of the busy streets. It is a small Taoist pagoda built by the Chinese community in 1909. It also goes by other names – Phước Hải Tự (Temple of the Sea and Luck).

The pagoda is always filled with incense smoke and lit by the light of fluorescent bulbs and candles. There are wooden carvings and reinforced paper mache statues representing various Buddhist and Taoist deities. To the right of the main entrance is a pond filled with turtles, which gives the pagoda a nickname, Turtle Pagoda.

Located about 50 kilometers from the city, the Cu Chi tunnels are a 250 km long underground labyrinth that served as a shelter for the Viet Cong – the North Vietnamese army during the War against the Americans. You will have the opportunity to crawl through the tunnels by yourself and understand what the soldiers felt at that time. The visit is not recommended for claustrophobic people and people suffering from heart or respiratory failure because the tunnels are very narrow. 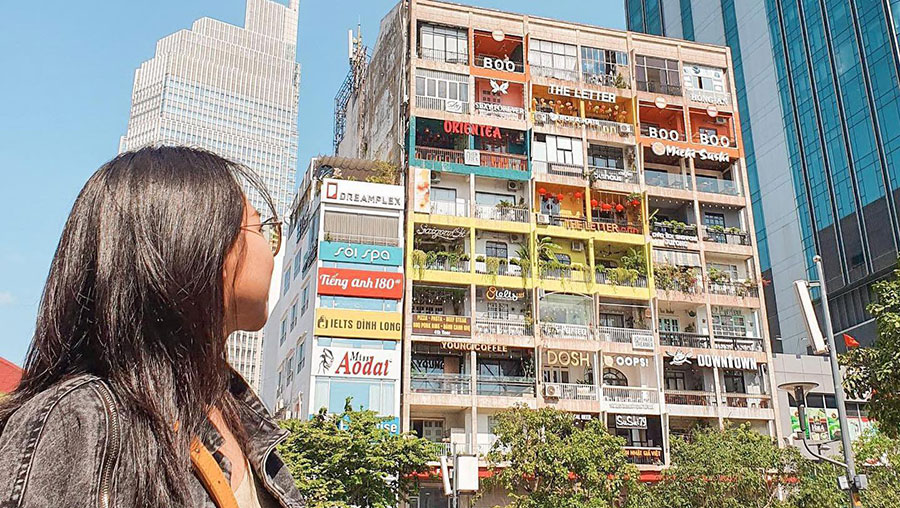 Built in the 1960s, this unusual building was once a home for American military officers and high ranking officials working for the Republic of Vietnam. After the Vietnam War, some of the apartments were provided to workers at the Ba Son shipyard. As the city developed, the apartments were rented out and turned into cafes, restaurants and stores. You could spend a whole day exploring this old 9-story building.

When you visit Ho Chi Minh City, don’t miss the experience of touring the city’s winding lanes on a scooter, the most commonly used means of transportation. You will have the opportunity to discover another aspect of this hectic and energetic metropolis, and better understand the open and welcoming Vietnamese. And of course, a series of typical dishes await you in this excursion.

Enjoy the panoramic view of the city from Saigon Skydeck

Located on the 49th floor of the Bitexco Financial Tower, one of the highest skyscrapers in the country, Saigon Skydeck is a great place to enjoy a panoramic view of the city. The observation deck has large transparent windows for a breathtaking view of the city as far as the eye can see. It is equipped with six long-range binoculars that allow you to see all the details of the city. In addition, the platform features six touch screens that display information about the places you are observing.

Street food is an integral part of Vietnamese gastronomy. The streets of Saigon have long become a culinary paradise that abounds with a variety of street food sold in small local restaurants and along the road. Modestly priced dishes are sometimes tastier than those found in fancy restaurants. Banh Mi (Vietnamese baguette), Banh Xeo (Vietnamese pancake), Bun Thit Nuong (rice vermicelli with grilled pork) and Com Tam (rice with three treasures) are dishes you should try when you visit Saigon.

A trip to Ho Chi Minh City would not be complete without tasting coffee. Coffee is not only a drink but also a culture. You will easily find several coffee shops where people sit inside or on the street sipping coffee at any time of the day. Hot or iced, black, with condensed milk, coconut milk, or even with egg, the choice is yours!

Have a drink in Bui Vien street

Bui Vien Street, a part of the Western backpackers’ district, is a great place to go out in the evening, both for foreigners and locals. This is where bars, cafes, restaurants and nightclubs are concentrated. You can sit on the sidewalk, drink a beer and eat street food, or go into the bars and clubs. The street is inflamed especially on weekends by unusual entertainment activities. Artistic performances attract many spectators while creating a lively atmosphere.

Where and how to chasing clouds in Vietnam?

11 atypical accommodations in Vietnam you should never miss

Traveling to Hanoi in winter, in the heart of silence and poetry…

Corleone town - the story of 'The Godfather', where the mafia is not just a movie thing