Corleone town – the story of ‘The Godfather’, where the mafia is not just a movie thing

Corleone town in the region of Sicily, Italy is known as from where Vito Andolini, the main character in The Godfather, played by Marlon Brando, emigrated to the United States. Although the place is associated with fiction, it was not invented by Hollywood. It exists and its relationship with the Mafia still persists.

The town is located in Sicily, 542 meters above sea level, and has about 12,000 inhabitants. Every year, tourists, fans of Francis Ford Coppola’s films, but also of nature and architecture, stop there to get to know its charms and its history.

It must be said that criminal activity seems to be part of the culture of this locality. Especially since the end of World War II, when the Sicilian gangs regained their strength without Mussolini, and took control of the island again.

Between 1944 and 1948, 153 murders were recorded, and during the 1950s and part of the 1960s, violence increased. There began to be deaths almost every day. Shot in the street, or “fallen” down the mountain.
Corleone was the cradle of the famous Cosa Nostra mafia bosses, such as Michele Navarra, Luciano Leggio, Leoluca Bagarella, Salvatore Riina and Bernardo Provenzano. The presence of this criminal network is still a reality. To such an extent that the City Council was dissolved in August 2016 by the Italian Government for its links with the Mafia.

For this reason, it is not normal to find souvenir stores or places with references to the famous Coppola film, although little by little tourism is beginning to take relevance. Nor is there a tour of places that served as scenery on the big screen, since the director used the towns of Forza d’Agiro and Savoca, in the province of Messina, for the scenes in Italy.

It is unusual to find souvenir stores or places with references to Coppola’s film.

The famous Bar Vitelli, where for the first time Michael Corleone crosses glances with his first wife, is in Savoca, and there is also the church where the two get married. In Forza d’Agro is the other church, which appears in the scene of The Godfather 2, in which Vito escapes to the United States. 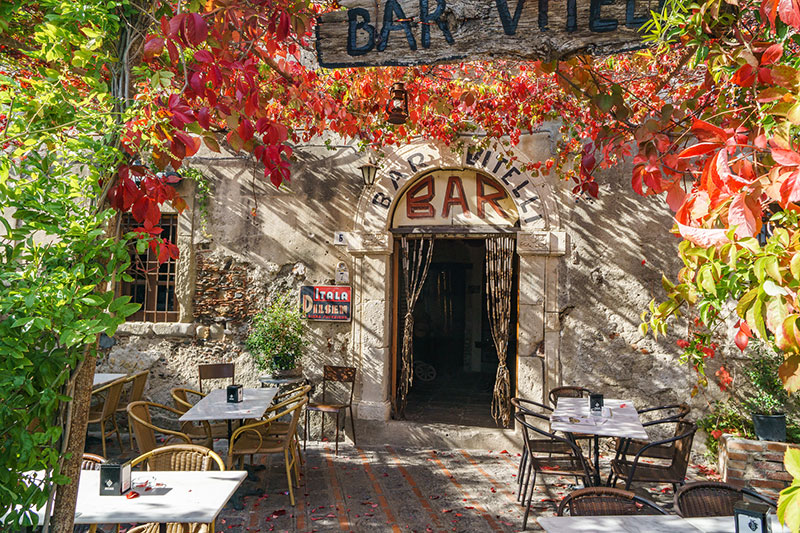 The famous Bar Vitelli, where for the first time Michael Corleone exchanges glances with his first wife, is in Savoca, and there is also the church where the two get married. In Forza d’Agro is the other church, which appears in the scene of The Godfather 2, in which Vito escapes to the United States.

Even so, being a source of inspiration for the film, Corleone town becomes a place of interest for its own attractions.

What to visit in Corleone town?

To delve into this dangerous history of the city, the Centro Internazionale di Documentazione sulla Mafia e del Movimento Antimafia (CIDMA) is a must. It is a museum inaugurated on December 12, 2000, in the presence of then President Carlo Azeglio Ciampi and UN Deputy Secretary General Pino Arlacchi, with the aim of welcoming academics and researchers interested in studying the Mafia phenomenon in depth.

Through documents with statements and confessions and a photographic exhibition of murders, the history of famous characters is told, as well as that of the men who fought to put an end to them.

Corleone town is known as the city of a hundred churches, although there are exactly 101 of them.

Corleone is characterized by its vast ecclesiastical heritage. It is known as the city of a hundred churches, although there are exactly 101. Among those that stand out are the 1547 church of San Domenico, the Capuchin convent, the monastery of San Salvatore, the 14th century church of San Agostino and the Chiesa Madre, dedicated to St. Martin and built in 1382.

Each of these buildings has unique styles that denote the presence of Greeks, Romans, Byzantines, Arabs and Normans during the town’s history.

For outdoor enthusiasts there is the Borgata Ficuzza nature reserve, a former hunting ground of King Ferdinand of Bourbon. Its forest is considered one of the most beautiful in Sicily, and is ideal for hiking.

The Piedra Soprano, meanwhile, where the remains of an ancient Arab defense tower are located and from where spectacular views of the valley can be appreciated, is chosen by lovers of climbing. Below, runs the San Leonardo River, which forms the Dos Rocas waterfall, with a small lake of green waters. Another suggested hike is known as Gole del Drago, full of waterfalls.

The forest of the nature reserve of Borgata Ficuzza is considered one of the most beautiful in Sicily. Within the reserve, but already in the neighboring village of Ficuzza, is the Royal Casina di Caccia, a palace commissioned by King Ferdinand III of Sicily in 1799. In the building there is a private chapel, wine cellar and storerooms.

Around it, smaller buildings complete what was once a small village. Guided tours are now available.