The tradition is holding firm despite the controversies about the fact that it is too commercial or over-attended… The pandemic and terrorist threats have not had an effect on what has become an unmissable end-of-year event: the Christmas markets in France. This is most beautiful our selection throughout country.

The Reims Christmas market is the third largest in France in terms of its number of chalets. New for 2022: it is no longer held around the cathedral but 1 km further on, at the exit of the station, on the upper part of the Jean-Louis Schneiter promenades and Porte de Mars. A larger space capable of accommodating 150 chalets instead of the usual 130.

The traditional activities are maintained, such as the Children’s Kingdom, a magical universe with Santa’s igloo, the little train and two transparent bubbles containing automatons. The cathedral has not been forgotten either, as its façade is the setting for a free 15-minute Regalia sound and light show (every Friday and Saturday at 8pm). Finally, the twinning of Reims with Nagoya will be celebrated with Japanese food tastings, calligraphy workshops and cosplay fashion shows.

You may not know, Amiens is the largest Christmas market in the Hauts-de-France region. Around the 13-metre high Christmas tree, there are no less than 120 chalets stretching over 2 km between the Place René Goblet and the Town Hall. The festivities begin on Friday 25 November with the opening of the Christmas village, the creators’ village and the ice rink, followed the next day by the opening of Santa’s house and the launch of the illuminations.

The Chroma show projected on the façade of the cathedral, is a must-see event and will be held every day from 7pm to 7.50pm from 1 December. And why not take advantage of the opportunity to walk along the new Jules Verne route dedicated to the most famous of Amieners?

The Arras Christmas market is back, or almost. From 25 November to 30 December, a hundred or so chalets will be set up not on two but on five squares in the town, including 70 on the Grand-Place. In the context of energy sobriety, there will be no sledge run or ice tunnel this year.

The ice rink will remain, but the service provider has undertaken to reduce its consumption by half, according to La Voix du Nord. A 25-metre high Christmas tree has been erected on the Place des Héros where lights are projected onto the façade of the town hall belfry. Santa’s house is set up in Ipswich Square.

In Metz, the festivities begin on 18 November with the opening of the Enchanted Markets. The 120 chalets are spread over five squares in the city. The Place de la République concentrates most of the activities, with its Christmas tree, its two merry-go-rounds and its 72-metre high panoramic tower (City Skyliner) offering an unobstructed view of the illuminations. A gourmet train is installed on the Place de la Comédie, while the Ferris wheel on the Place d’Armes J.F Blondel allows you to admire Saint-Etienne Cathedral from closer.

The Sentier des Lanternes (Lantern Trail) was created about ten years ago and is located in the middle of the hundred-year-old trees of the Square Boufflers. Imagine hundreds of luminous lanterns featuring characters such as Father Christmas and his reindeer, elves, magical trees and flowers and many other surprises in the midst of which you can wander around as if by magic… The other great attraction of the Metz Christmas market is the glass baubles blown in the International Glass Art Centre in Meisenthal, which Moselle inhabitants are crazy about.

In Nancy, the Christmas festivities also start early, as Saint Nicholas is also celebrated here! Eight villages are set up on as many squares. The largest of them, the large Saint-Nicolas village, occupies the Place Charles III with its 65 chalets. The gourmet village, reserved for regional culinary specialities, is set up on Place Vaudémont.

The highlight of the festivities is the Great Weekend of Saint Nicholas (3 and 4 December) marked by a large parade of the patron saint of Lorraine, placed this year under the theme “Glass and Lights”. Each year, this parade attracts up to 100,000 people. The main activities are to be found on the other squares: the Ferris wheel on the Place de la Carrière, the ice rink on the Place Simone Veil or the guinguette of Father Fouettard on the Place des Bourgets.

The Strasbourg Christmas market is the one of all superlatives! With over 300 exhibitors, it is the largest in France. Its tree erected on Place Kleber traditionally reaches over 30 metres and is the highest in the country. With a history dating back to 1570, the Christkindelsmärik, the name given in Alsatian to the traditional “market of the Christ child”, is also one of the oldest in Europe. In short, Strasbourg is indeed the “capital of Christmas”! 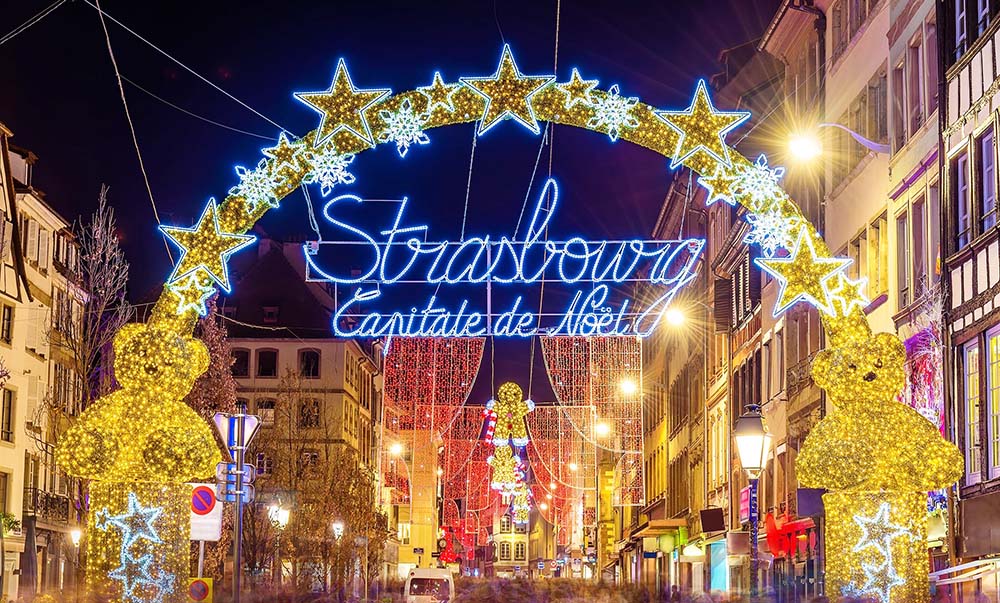 Don’t miss the Place Grimmeissen, which brings together vintage furniture, second-hand goods, DIY decorative objects, organic products, workshops and concerts. Finally, to prolong the pleasure of the festive season, head for the “Village de l’Après” which will be held from 26 December to 1 January in the Louise Weiss and Suzanne Lacore squares.

Colmar – the most typical and traditional of Alsace’s large cities nestled in the heart of the vineyards, offers six Christmas markets. The assurance of spending a beautiful day strolling through the birthplace of the sculptor Bartholdi, sublimated by more than a thousand points of light, during the festive season as well as the rest of the year. The most traditional of Colmar’s markets is held inside the majestic medieval building of the Koïfhus. You can admire the creations of about twenty local craftsmen: ceramists, potters, master glassmakers, cabinetmakers, wood carvers, hat makers, jewellers…

Return to the enchanting streets to reach the Place de l’Ancienne Douane and its stalls overflowing with gift ideas for the holidays. And to devour a hot Alsatian speciality, head for the gourmet market on the Place de la Cathédrale, where nine chefs from this city known for its first-rate gastronomy, present their dishes and specialities. After a few laps of the river, let post wish list in Santa’s giant letterbox.

The historic land of the Counts of Wurtemberg, Montbéliard has inherited the tradition and spirit of the Christkindelmarkets and draws on its Germanic roots to celebrate Advent. Montbéliard is recognised as one of the most beautiful Christmas markets in France and Europe. 180 craftsmen, hand-picked for the quality, authenticity, originality and diversity of their products gather around the Saint-Martin. As for flavours, the regional specialities, Montbéliard sausage and cancoillotte in particular, delight and warm up the gourmets.

There is no one big Christmas market in the capital, but a multitude of gatherings of chalets spread across different districts. The most famous of these, which until 2018 was held on the Champs-Élysées, now takes place in the Tuileries Gardens. In addition to a hundred or so chalets, there is a funfair, an ice rink and a Ferris wheel. The most “postcard” is the one organised on the square in front of Notre-Dame cathedral from 9 to 26 December.

The Alsatian market held in front of the Gare de l’Est (from 30 November to 16 December). It has all Alsatian delicacies such as pretzels and kouglofs. More modern, the Christmas market organised within Station F brings together dozens of start-ups and designers whose products, often made in France, cannot be found elsewhere. The Recyclerie, housed in a former train station in the 18th arrondissement, offers themed Christmas eco-villages every weekend from 26 November to 18 December.

Thonon-les-Bains Christmas Market installed on the Belvedere esplanade overlooking Lake Geneva, about sixty chalets offer local craft products and mountain specialities. This is also where the 550 m² natural ice rink is located. On the façade of the Town Hall, don’t miss the sound and light show every day from 5pm to 9pm. There is also a mysterious forest that plunges the most curious into a magical multi-sensory universe.

The scenography, which is like a fairy tale on a 22-metre long path, has been imagined especially for the Féeriques de Thonon: encounters with strange creatures, installation of new light projections, diffusion of animal sounds and intoxicating smells are on the programme, every day from 11 am to 9 pm.

The Christmas events in Mulhouse are different from the other markets in the region by the creation of a fabric that dresses the city centre: fountains, monuments, chalets and shop windows… This corresponds to almost 10 kilometres of printed fabric! This year, and for the first time in many editions, a new designer will present this year’s fabric: Caroline Lux, a Colmar native and founder of the Avenue d’Alsace brand.

12. Christmas market and festival of lights in Lyon

In Lyon, Advent is marked by the traditional Festival of Lights. The capital of Gaul shines with the thousands of “luminous lights” placed by the inhabitants of Lyon on their windowsills. And also through the numerous light and video projections on the city’s monuments which make this festival the meeting place for digital and luminous arts, the largest gathering of its kind in the world. Thirty works of art are spread out in emblematic places, such as Place Bellecour, Place des Terreaux, Fourvière hill or the Parc de la Tête d’Or.

In Toulouse, everyone meets on the famous Place du Capitole. This is where one of the most beautiful Christmas markets in France with a hundred or so exhibitors in pretty white chalets, four of which are fully dedicated to crafts and designers. At the heart of this village is a large ice rink that children look forward to. This year, the market is open to other squares and districts, notably the Square de Gaulle and the Ramblas of Jean-Jaurès.hildren look forward to.

In Alsace, of course, the north of France, in the Alps, on the Atlantic coast and even in the south. Our selection of the most beautiful and original markets where you can enjoy the festive season.

As the festive season approaches, a stroll through the Christmas Market with family and friends is a must. It is also an opportunity to admire the magical decor, discover the offers of the designers and buy gifts. Every year, several Christmas markets are organised all over the world. We have ranked the most beautiful Christmas Markets in France. Wishing you a blessed Advent season!