After the unification of the country in 1975, the city grew exponentially and became the heart of southern Vietnam. In this bustling city, coexisting cultures and religions mixed harmoniously together, creating an incredible vibrant atmosphere. Du lich tu te publishes this travel guide in the hope that you will find useful information for your visit to this incredible city.

I. The best time to visit Ho Chi Minh City

The weather in Ho Chi Minh City is generally warm. The city has two distinct seasons: the dry season (December to May) and the rainy season (June to November). During the dry season, daytime temperatures can range between 32 and 35 degrees Celsius with little rain.

In the rainy season, there is heavy rainfall with 12–15 rainy days per month and daytime temperatures of 30–32 °C. Statistically, June and September are the months in which the greatest rainfall is recorded. The best time to visit Saigon is from November to April, when the rainfall is moderate and the temperature is comfortable for outings.

The Colonial architectures Site & buildings of the French Indochina period:

The Central Post Office is located in Saigon’s historic Dong Khoi Street, opposite the cathedral. Built at the end of the 19th century, the complex is characterized by the typical colonial style of the time. Inside, the main hall features two murals depicting a map of the “Telegraphic Lines of Southern Vietnam and Cambodia in 1892” and a map of “Saigon and its surroundings in 1892. The building is open to the public every day from 06:00 to 22:00 (free admission).

Located in the historic center of Saigon (Nam Ky Khoi Nghia Street), the Reunification Palace is historically associated with the end of the Vietnam war, and the reunification of the country.

In 1962, there was an attempted coup, during which a Republic of Vietnam military aviation plane bombed the palace, seriously damaging it. Having escaped the attack, Ngo Dinh Diem had a new complex built, with a basement equipped with a bunker against a possible aerial bombardment.

On April 30, 1975, the tanks of the Liberation Army of  North Vietnam broke through the gate of the main entrance of the building and, after a few minutes, the Vietnamese flag was raised on the top of the building, signaling the end of the fierce war for independence of the Vietnamese people. Originally called the Independence Palace, the complex was later renamed the Reunification Palace.

The Ho Chi Minh City History Museum is located at 2 Nguyen Binh Khiem Street, Ben Nghe Ward, District 1, in Ho Chi Minh City, Vietnam. Formerly known as the Musée Blanchard de la Brosse, built by Auguste Delaval in 1926, it received its present name in 1979. It is a museum showing the history of Vietnam with artifacts from all periods. However, themes covered by the exhibits include the prehistoric period (500,000 years ago to 2879 BC), the Metal Age (2879–179 BC), including artifacts related to the Dong Son culture of northern Vietnam and the Sa Huynh culture of central Vietnam.

Cho Lon, lying on the west bank of the Saigon River (District 5), is considered the seat of the Chinese community in Vietnam. Cho Lon is also well known for its various pagodas, places of prayer and aggregation for the local Chinese community. One of the main sites is the Thien Hau Pagoda, located along the busy Nguyen Trai Street.

One of the best things to do in Ho Chi Minh City is to visit the War Remnants Museum. The museum displays the horrors that the Vietnam and Indochina Wars caused to the country and its inhabitants through a variety of exhibits on these conflicts. While the exhibition here might seem heavy and dark to some people, it offers truly rare insights into the hardship that the Vietnamese people have endured throughout the country’s turbulent history.

The pagoda is dedicated to Ngoc Hoang (Jade Emperor), the supreme deity of Taoism, a set of beliefs and values that have a very strong influence on Vietnamese culture. Although the Jade Emperor Pagoda is a relatively new structure, dating back to 1909, it is still one of Saigon’s five main temples and a must-see. Built in 1909, the pagoda is characterized by a typically Chinese architectural style, as evidenced by the meticulously decorated roof.

Located in the Cu Chi District, 30 km north of Saigon, the Cu Chi Tunnels are a vast complex of artificial tunnels built by Vietnamese guerrillas during the two Indochina wars. The first tunnels were built in the late 1940s by Vietnamese guerrillas during the conflict with the French (First Indochina War). They were mainly used as “communication routes” between the various villages in the area. 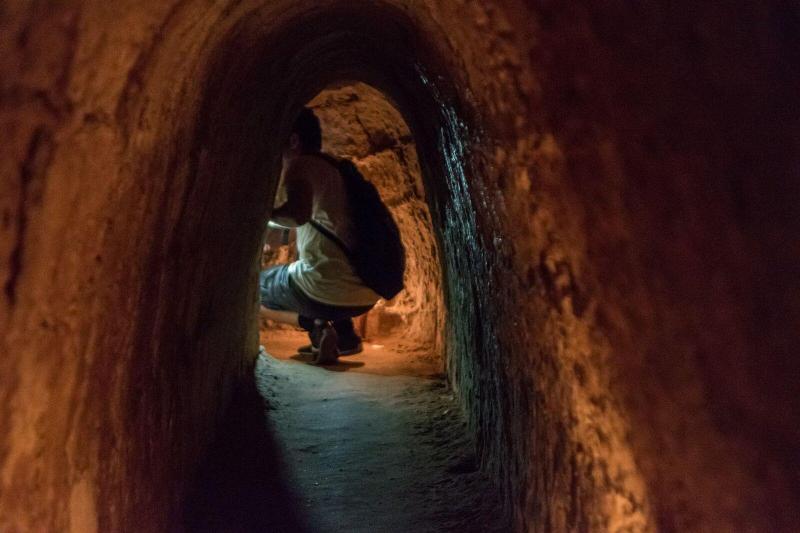 With the beginning of the Vietnam War, the Vietnamese People’s Army of the National Liberation Front further expanded the network. Overall, the Cu Chi tunnels reached a linear extension of about 250 km, distributed in an area from Saigon to the border with Cambodia.

If you travel to Saigon from Hanoi, or from northern Vietnam in general, you will most likely take a 2 hours flight to save on time and money, but otherwise you have plenty of options to reach Ho Chi Minh city, and begin your adventure here in earnest.

Located a short distance from the city center, Tan Son Nhat Airport (IATA Code: SGN) welcomes foreign and domestic arrivals daily and represents the connecting point for all flights from and to Ho Chi Minh City. The airport is connected to all major cities in East and Southeast Asia by luxurious, standard and low-cost flights. The connections with Singapore, Bangkok, Kuala Lumpur, and Hong Kong are very useful for travelers who want to discover multiple countries in Southeast Asia.

Ho Chi Minh City is the southernmost terminus of the Reunification Railway. It is therefore connected to the main cities of Vietnam (Hanoi, Nha Trang, Da Nang, Hue). Taking the train might take you a long while to get to Ho Chi Minh City from Hanoi, but if you are planning on visiting all major regions of Vietnam, then this is an amazing choice that allows you to see more of Vietnam.

Traveling by bus is often the cheapest way to get around Vietnam. The use of night buses allows great savings and is quite inconvenient. The use of open tickets is very convenient since it allows you to choose the dates and stops as you like. Generally, it is possible to travel across the entire country with such a bus ticket if you plan to go along the Hanoi – Ho Chi Minh City route.

There are many options for accomodation in Saigon, for all budgets. Prices range from low to high quality, depending on your budget and the location that you are looking for.

This area is within close range of tourist attractions such as the Fine Art Museum, Ben Thanh Street Food, etc., and it is very, very lively at night. You will find lots of cheap hotels, hostels, and dorms, and especially many bars and cafes at night. These hotels/ guest houses are ideal, if you want to spend time enjoying the exciting nightlife of the city.

Many hotels are located between the famous “Ben Thanh” market and the reunification palace, especially in Le Thanh Tong Street and Ly Tu Trong Street. You can find many hotels here at medium prices, but also cheap with a high standard.

In this area, especially the position near the river, there are many luxury hotels with nice views.

Hotel in other districts & near the airport

District 1 is considered the heart of Ho Chi Minh City. You may prefer to find accommodation outside of this area if you want to save some money on lodging. You can easily get to the central area of the city by taxi, motorcycle taxi, bus, etc. But beware of the regular traffic jams during rush hours. Traveling a bit early in the morning or a bit late in the evening might actually save you hours of time. Here are some establishments in District 5, where you can comfortably get to the city center:

Saigon Airport (Tan Son Nhat International Airport) is located 7 km from the city center. If you prefer to sleep near the airport, there are plenty of choices such as:

V. Things you should try

Bui Vien Street and Pham Ngu Lao Street are the backpacker streets of Ho Chi Minh City. The nightlife here is what makes the reputation of these streets. You will find a plethora of bars playing dance music, small beer shops with plastic tables spilling into the street, restaurants, cafés, and boutiques… And later, you can wander into whatever bar seems the liveliest, and take a fresh beer with you to the street. This area doesn’t quiet down, and you can stay here and party all night long.

The markets in Ben Thanh (D1) and Binh Tay (D5) are among the busiest in the country, and they sell almost any type of merchandise you can think of. One thing to keep in mind if you choose to do your shopping here: negotiate the price. The real price of the goods rarely matches the price tags. Merchants might ask you to pay double, or even triple of their intended selling price. This is not really a method of scamming, but rather a general custom in these open markets: you bargain for what you buy.

You can also go to other markets in the central area: the Central Market (Address: 4 Phm Ng Lo), Saigon Square 1 (Address: 81 Nam K Khi Ngha), and the Russian Market (Address: 328 V Văn Kit). Additionally, there are several large malls around town—Vincom Center Mall and Saigon Centre Mall are both conveniently located in District 1.

Drink with a view: Rooftop cocktails

Why not look for the best place to enjoy panoramic views of Saigon at night? The rooftop cocktails are affordable for travelers on all budgets, especially if you make the most of Happy Hours. Here is the list of the best roof bars in Ho Chi Minh:

Embark on a dinner cruise in Ho Chi Minh City, enjoy a traditional Vietnamese meal and enjoy the most breathtaking views of the city. Admire the twinkling lights on the reflection of the water as you cruise along the Saigon River – a fantastic way to end the evening.

Ho Chi Minh city is a vibrant place, and is representative of a growing Vietnam. The city is oozing with energy and style, and has earned its name as “the sleepless city”. Your trip to Vietnam wouldn’t be complete if you haven’t discovery Ho Chi Minh City. We at Du lich tu te hope that you found the information in this guide useful, and wish you bon voyage!

Where and how to chasing clouds in Vietnam?

11 atypical accommodations in Vietnam you should never miss

Traveling to Hanoi in winter, in the heart of silence and poetry…

Traveling to Hanoi in winter, in the heart of silence and poetry...